L.A. is warned of possible suit against homeless sweeps law 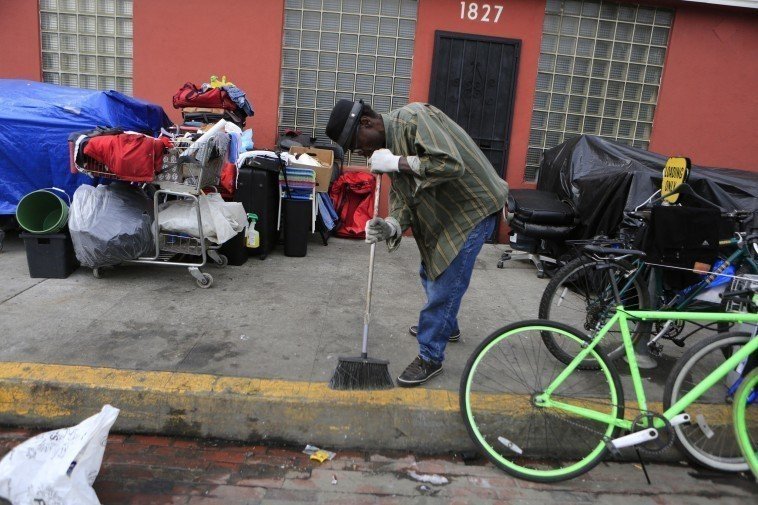 When controversial legislation cracking down on homeless encampments took effect last month, Los Angeles appeared to have settled on a strategy for dismantling unsightly tent cities that have formed in neighborhoods around the city.

But at a meeting of the City Council’s homelessness committee Wednesday, the controversy continued to boil, with no resolution in sight.

The panel was considering relaxing the two laws, which make it easier for sanitation workers and police to confiscate and destroy tents and other belongings stored in parks and streets.

The measures authorize the city to destroy bulky items without notice, and to impound other property with 24 hours’ warning. The belongings are stored for 90 days at a skid row facility where owners can reclaim them. Violators who refused to remove their items can be cited or arrested and charged with a misdemeanor.

Westside Councilman Mike Bonin proposed striking the misdemeanor penalty, exempting backpacks, documents and medications from confiscation and giving homeless people a second chance to comply before they are cited or arrested.

The changes, however, seemed to satisfy no one at the hearing, and the committee asked staff to report on how to revise or implement the measures before amendments are considered.

Gary Blasi, a retired UCLA law professor now working on behalf of homeless people at the pro bono firm Public Counsel, said, the LAPD is using the tactics of the new ordinances “under the guise of another older law.”

LAPD Capt. Mike Oreb of the Central Area division said the enforcement was routine. But a letter from Mayor Eric Garcetti may have opened the door to some of the recent crackdowns.

The ordinances became law after the mayor refused to either sign or veto them. Instead, he asked that enforcement be put off until they could be amended.

After legal experts questioned his authority to suspend enforcement, the mayor sent a letter dated July 27 to department heads, including Police Chief Charlie Beck, saying there were “exigent circumstances” under which homeless people’s property could be seized with little or no notice. Notification is among the major provisions of the new encampment ordinances.

“There may be situations in which departments may feel that tools beyond the existing notice period are necessary to respond to urgent public safety situations,” Garcetti wrote. “Such tools are available under existing citywide practices.”

A Garcetti spokeswoman on Wednesday said amending the ordinances would help ensure that the city’s approach to enforcement “is smarter, more compassionate, better able to withstand legal challenge, and consistent with the city's goals of helping homeless individuals move off the street and into housing.”

Mark Ryavec, president of the Venice Stakeholders Assn., told the homelessness committee the misdemeanor penalty was necessary to give the law authority.

Homeless “campers laugh off the possibility of infraction,” said Ryavec, whose organization has sued the city over the camps.

“Not all homeless people are good people,” said Dennis Gleason, policy director for City Councilman Joe Buscaino, who represents Watts and the Harbor area. “Construction of a homeless structure can be used to hide illegal activity from law enforcement.”

Civil rights lawyers from Munger Tolles & Olson testified that the proposed amendments were cosmetic and issued veiled warnings that the city would be sued unless enforcement was suspended.

Eastside Councilman Gil Cedillo, who voted against the ordinances, was disturbed by the prospect of police taking property while homeless people are present and claiming it.

“We can’t just go forth and seize personal property with them in attendance,” Cedillo said.

City Administrative Officer Miguel A. Santana, responding to a request by the committee, said a report on expanding homeless storage facilities citywide was already underway.

“This is not the solution, the panacea,” Santana said. “It’s a very small piece of a much bigger strategy.”