Los Angeles Cuts Water Use by 13% in One Year; Exceeds Mayor Garcetti's Challenge 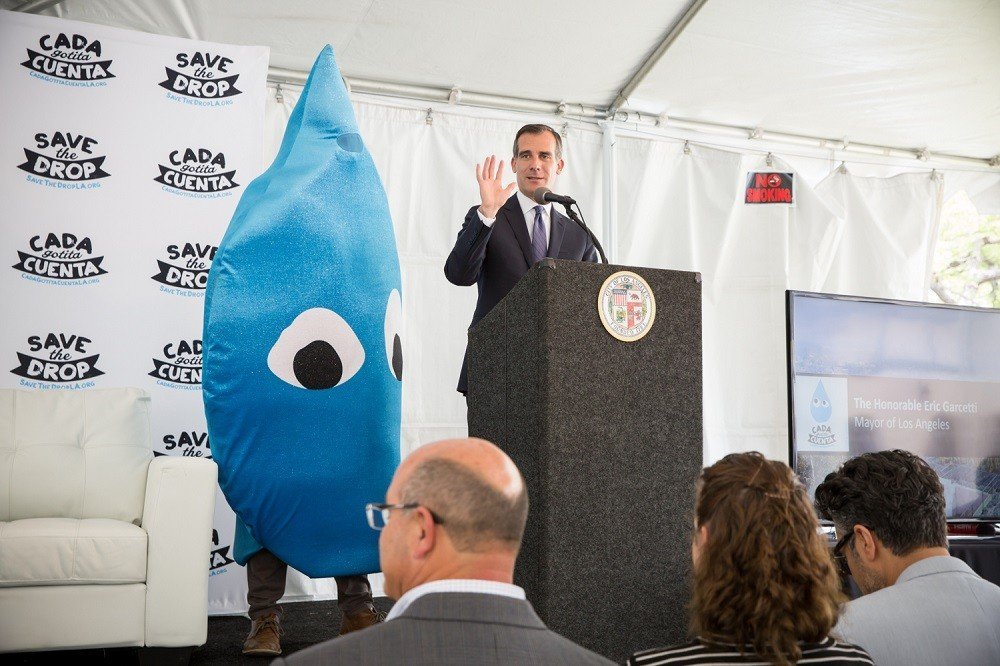 Mayor Eric Garcetti today announced that Los Angeles has met and surpassed his first benchmark goal of 10 percent water reduction by July 1, 2015. The City has rallied in response to the historic drought and has achieved a significant milestone in Mayor Garcetti’s water reduction plan as outlined by his Executive Directive No. 5 and in L.A.’s first-ever Sustainable City pLAn.

Since the roll out of the Mayor's Executive Directive in October 2014, L.A. residents and businesses leaped to action by altering water use and taking advantage of conservation rebates offered by the Los Angeles Department of Water and Power (LADWP). Daily per capita water use for the year ending June 30, 2015 was 113 gallons per capita per day (GPCD), compared to 131 GPCD for the year ending June 2014, a reduction of more than 13%.

The City's water use was also within the margin of measuring error of the state's target, using 244 more acre-feet than the state allocated for June. This amount equates to about 4 hours of citywide water usage.

"Angelenos have responded to my call for action and have stepped up to significantly conserve during this historic drought-- building on our City's already impressive history of water conservation," said Mayor Garcetti. "The most valuable solution to this water crisis is our willingness to change our relationship with water. Keep saving the drop, L.A.! Every bit counts."

Today, Los Angeles uses just as much water as it did nearly 45 years ago despite the rise in population by more than one million residents. City Departments have also done their part to reduce water use, including a 33% estimated savings by the Department of Recreation and Parks this fiscal year, putting 76% of public golf courses on recycled water, and reducing irrigation for ornamental turf to two days per week.

When we take action, even problems as serious as the historic drought become surmountable. What action have you taken to cut your water use?

Mayor Garcetti also announced that the LADWP turf removal rebate will continue at $1.75 per square foot up to 1,500 square feet due to overwhelmingly high demand for the program, despite the pause on the additional $2 per square foot offered by The Metropolitain Water District of Southern California (MWD). L.A. water customers have replaced more than 23 million square feet of grass with low water using, sustainable landscaping—saving more than 1 billion gallons of water each year. Angelenos interested in applying for the turf rebate can do so at www.socalwatersmart.com.

"Los Angeles continues to be a model for sustainable urban water use, all thanks to our customers’ heightened awareness about the drought and their willingness to do their part with the help of LADWP rebates and incentives," said Marcie Edwards, LADWP General Manager. "We’re doing great, but we must keep our eye on the Mayor’s goal of 20 percent conservation by 2017."

Mayor Garcetti also announced that Liz Crosson has been hired as water policy advisor to support the Mayor's Water Cabinet in continuing water saving progress internally in the City, meeting the city-wide water reductions required in Executive Directive No. 5, and achieving the longer term local water outcomes in the pLAn. The position is being funded with grants from philanthropic sources including Environment Now and the California Water Foundation. Crosson is currently the Executive Director of Los Angeles Water Keeper and will report to the Mayor's Chief Sustainability Officer, Matt Petersen.

Water saving tips and information can be found via the Save the Drop campaign at www.savethedropla.org.

As the drought persists and LA weathers through another hot summer, Angelenos can do their part in helping achieve the next phase of Mayor Garcetti's water goals (15% by 2016) and state conservation targets by: