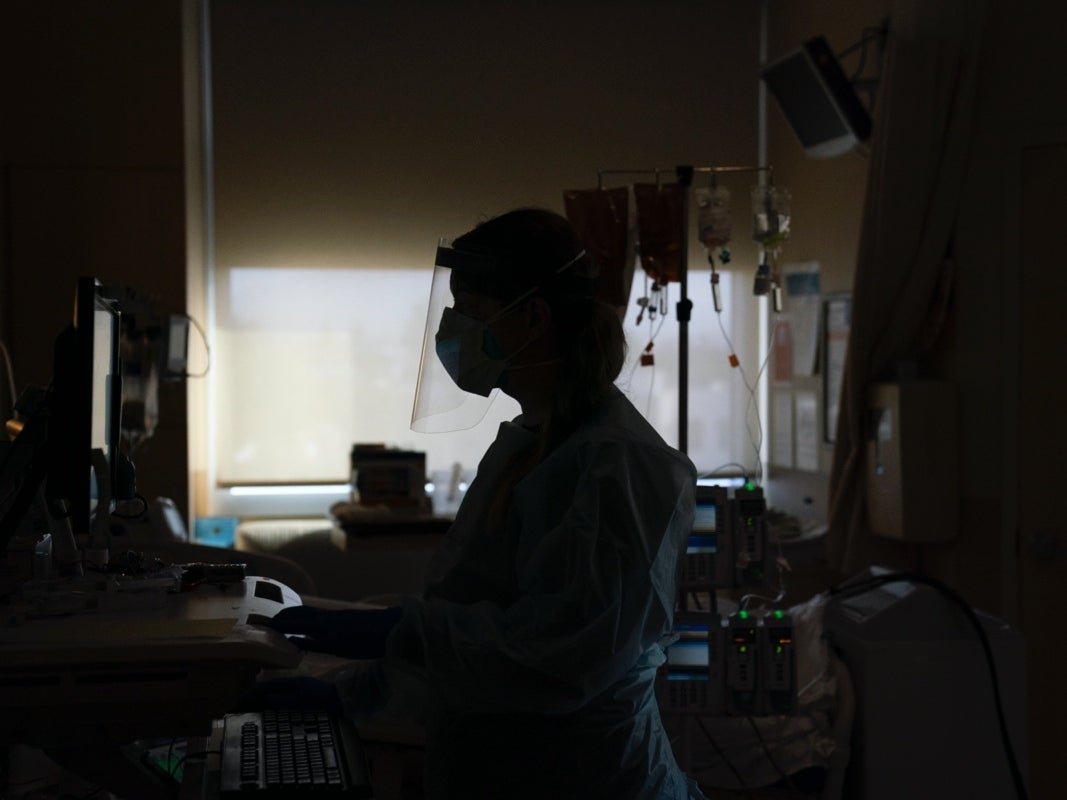 As California's intensive care unit capacity sunk below 15% for a second day, the state imposed a sweeping stay-home order for 11 counties.

The state-mandated "regional stay-at-home" order goes into effect at 11:59 p.m. Sunday and will remain for at least three weeks.

ICU capacity plummeted to 12.5 percent in the Southland's 11 counties Saturday, health officials said. This is the second day the region's ICU capacity dropped below the state's threshold of 15 percent for triggering the widespread shutdown, introduced by Gov. Gavin Newsom Thursday.

Los Angeles County had 21 percent of its ICU beds available and Orange County had 20 percent Saturday, but those numbers were expected to decline later when the counties release their daily updates.

The stay-at-home order will ban gatherings of people from different households. Regions will be able to exit the order on Dec. 28 if ICU capacity projections for the following month are above or equal to 15 percent.

The San Joaquin Valley also fell under the new order after its ICU capacity dropped to 8.6 percent.

The following businesses and recreational facilities will close Sunday:

Schools with waivers can remain open as well as "critical infrastructure." Retail stores can keep doors open as long as capacity is limited to 20 percent. Restaurants will be forced to shutter dine-in operations and only remain open for takeout and delivery service.

Hotels and motels are only allowed to stay open "for critical infrastructure support only," while places of worship will be restricted to outdoor-only services.

Entertainment production may continue — including professional sports — but without live audiences.

It remains to be seen exactly how state officials will enforce the restrictions. Some law enforcement agencies spoke out against the statewide curfew that went into effect in November.

And in Riverside, Sheriff Chad Bianco decried Newsom's approach to handling the statewide restrictions as the state governor warned Thursday that he would withhold funding from counties that decide not to follow the orders. That funding could be redirected to counties that did follow the new health guidelines.

"Ironically, it wasn't that long ago that our same governor loudly and publicly argued how wrong it was for the president of the United States to withhold federal funding from states not complying with federal laws," Bianco said in a YouTube video released Friday. "The dictatorial attitude toward California residents while dining in luxury, traveling, keeping his business open and sending his kids to in-person private schools is very telling about his attitude toward California residents, his feelings about the virus, and it is extremely hypocritical."

Bianco further announced that his deputies would not be enforcing the order.

Many living in Southern California have already been living under such restrictions as Los Angeles County barred in-person dining Thanksgiving week to combat an alarming rate of community spread seen in the Southland.

Los Angeles County set a daily-case record for the third time in four days Friday with nearly 9,000 infections reported, while hospitalizations continued rising at record levels and deaths spiked to a level not seen in months.

The county reported 8,860 new coronavirus cases on Friday, shattering the daily record of 7,854 set on Thursday. The number of people hospitalized hovered at 2,668, the highest point seen during the entire pandemic.

"Los Angeles County continues to experience a pandemic that is moving in a direction that will cause significantly more suffering and deaths," county Public Health Director Barbara Ferrer said. "As case numbers and hospitalizations continue to rapidly increase, the number of individuals who will experience severe health outcomes will also increase."

"The best thing to do right now and in the upcoming holiday season is to stay at home and not travel," she said. "Encourage your family and friends to stay connected virtually and delay meeting in person until we are at a better place in the pandemic. Collectively, we have a chance to slow the spread and save lives."

Newsom said the order is "fundamentally predicated on the need to stop gathering with people outside of your household, to do what you can to keep most of your activities outside and, of course, always ... wear face coverings, wear a mask."

The governor also noted that the state still has a travel advisory in place recommending against non-essential travel and urging people to quarantine when they return to the state. When the regional stay-at-home order is triggered, it will strongly urge residents to cancel any non-essential travel.

Dr. Mark Ghaly, the state's Health and Human Services secretary, acknowledged there is no real mechanism for enforcing such a travel restriction, but the state will rely on public cooperation.

"We believe that really emphasizing this is what we hope our citizens will do because their communities are at particularly high risk, their hospitals are having difficulty keeping available ICU beds open, that people will restrict their travel statewide," he said.

The state's full stay-at-home order can be read here.