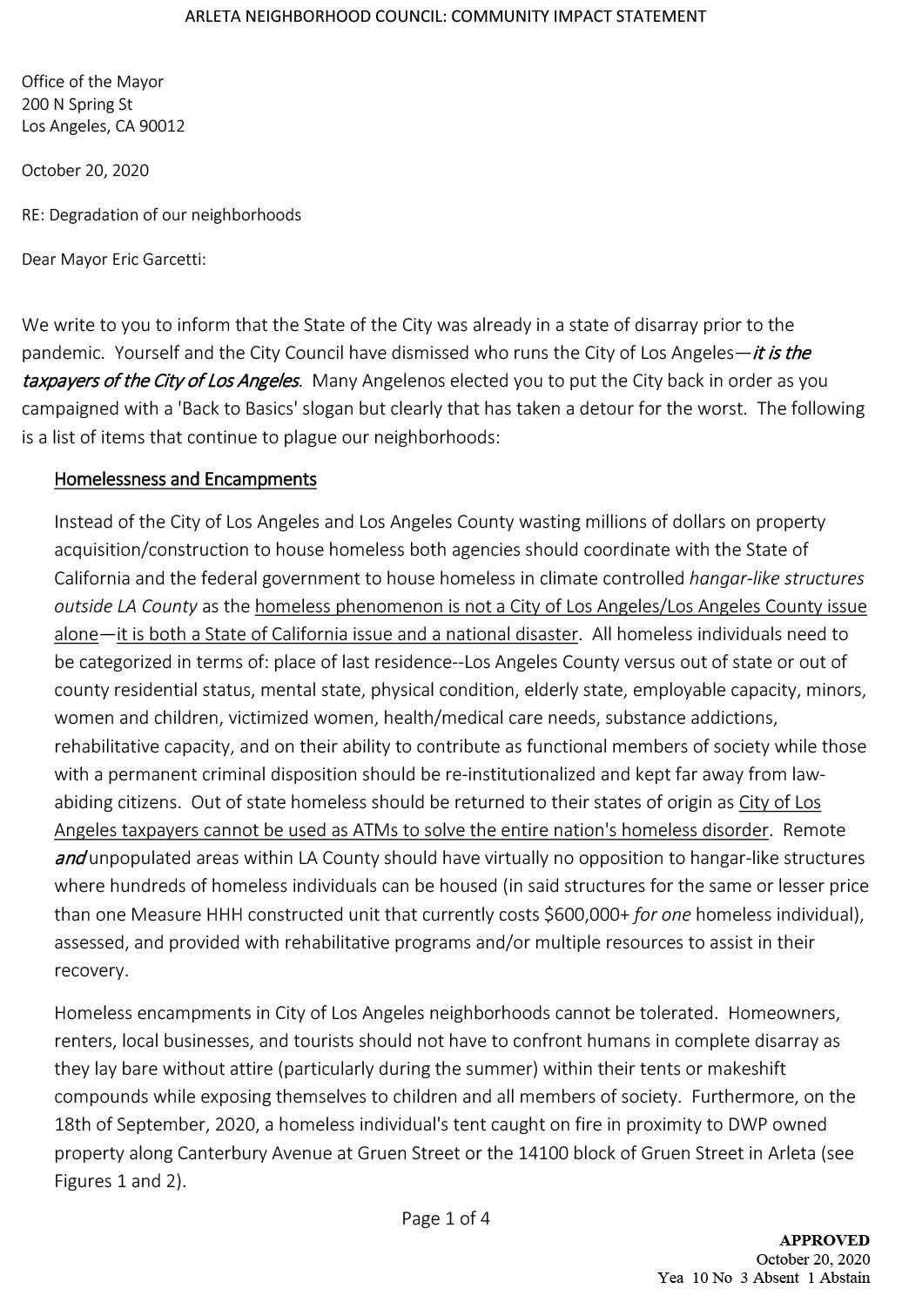 The following is the Arleta Neighborhood Council's correspondence to the Mayor regarding neighborhood degradation in spite of taxpayers' contributions.

RE: Degradation of our neighborhoods

We write to you to inform that the State of the City was already in a state of disarray prior to the pandemic. Yourself and the City Council have dismissed who runs the City of Los Angeles―it is the taxpayers of the City of Los Angeles. Many Angelenos elected you to put the City back in order as you campaigned with a 'Back to Basics' slogan but clearly that has taken a detour for the worst. The following is a list of items that continue to plague our neighborhoods:

Homelessness and Encampments
Instead of the City of Los Angeles and Los Angeles County wasting millions of dollars on property acquisition/construction to house homeless both agencies should coordinate with the State of California and the federal government to house homeless in climate controlled hangar-like structures outside LA County as the homeless phenomenon is not a City of Los Angeles/Los Angeles County issue alone―it is both a State of California issue and a national disaster. All homeless individuals need to be categorized in terms of: place of last residence--Los Angeles County versus out of state or out of county residential status, mental state, physical condition, elderly state, employable capacity, minors, women and children, victimized women, health/medical care needs, substance addictions, rehabilitative capacity, and on their ability to contribute as functional members of society while those with a permanent criminal disposition should be re-institutionalized and kept far away from law-abiding citizens. Out of state homeless should be returned to their states of origin as City of Los Angeles taxpayers cannot be used as ATMs to solve the entire nation's homeless disorder. Remote and unpopulated areas within LA County should have virtually no opposition to hangar-like structures where hundreds of homeless individuals can be housed (in said structures for the same or lesser price than one Measure HHH constructed unit that currently costs $600,000+ for one homeless individual), assessed, and provided with rehabilitative programs and/or multiple resources to assist in their recovery.

Homeless encampments in City of Los Angeles neighborhoods cannot be tolerated. Homeowners, renters, local businesses, and tourists should not have to confront humans in complete disarray as they lay bare without attire (particularly during the summer) within their tents or makeshift compounds while exposing themselves to children and all members of society. Furthermore, on the 18th of September, 2020, a homeless individual's tent caught on fire in proximity to DWP owned property along Canterbury Avenue at Gruen Street or the 14100 block of Gruen Street in Arleta (see Figures 1 and 2).

Figures 1 and 2: Before and After pictures of tent at 14100 block of Gruen St at Canterbury Avenue. September 18, 2020.
This is completely unacceptable and had the fire spread to the DWP power lines and residences we would be having a different reaction/discussion here. In Arleta, law-abiding taxpaying citizens are in a constant state of surveillance as homeless individuals engage in (but not limited to):
• Chronic petty theft from private residences and commercial establishments
• Sales of narcotics
• Prostitution
• Theft from vehicles and theft of motor vehicles
• Threat of fires caused by homeless' cooking and/or use of incendiary devices to consume narcotics
• Physical assaults on private persons
• Harassment of: youth (particularly of female teenagers and younger minors), citizens with disabilities (particularly the blind), and the elderly
• Environmental degradation and public safety hazards as homeless urinate and defecate in our sidewalks, alleys, streets, and provoke infernos in surrounding hills/mountains and particularly inside the Sepulveda Basin
• Unsafe parks due to homeless encampments being there, thus making both children and adults feel unsafe and unwelcomed at their own community parks
• Homeless blocking use of sidewalks with their own persons and belongings (see Figure 3)
Figure 3: El Super - 9710 Van Nuys Blvd. August 28, 2020.

Moreover, we don't understand why the City just rolls over to judges' decisions (federal or not) as they relate to homelessness. What happened to collective municipal appeals or judge recalls and basic fighting back? Such legal judgments hurt the City of Los Angeles and we are astonished that the combined brainpower of city attorneys and elected officials cannot defend our neighborhoods nor the City's treasury. Your invitation to the nation to send their homeless to the City of Los Angeles, as you entertained a presidential run, was taken literally and it was and remains both an irresponsible and reprehensible proclamation as Angelenos will now have to face the homeless disaster for years to come long after the conclusion of your administration. Angelenos deserved better when you were elected but what they got seems to have become a protracted extension of 2006's Mayoral election results.

Unpermitted street vending continues to operate with impunity
The current penalties do nothing to protect the public and there is no true punitive enforcement, much less sufficient joint operations with LA County Health Department, nor confiscation of dangerous equipment being operated in our streets. Furthermore, the ordinances that protect food street vendors not only do not allow for the collection of sales taxes, as is the case with other regulated businesses in the City, but they contribute to unemployment as neighborhood brick and mortar restaurants that sell the same products street food vendors are selling are at a disadvantage as street food vendors do not incur large capital investments for equipment acquisition and site location, do not have to take out loans to both employ personnel and pay for operations, do not pay payroll taxes, and do not adhere to an array of rules and regulations―which both the City of Los Angeles and Los Angeles County Health Department require―while trying to earn a profit. Food street vendors contribute to job displacement and several businesses have closed down in the community plan area as a result (e.g. Papas & Tacos in Pacoima). Street vendors that sell cooked food are frequently sites where people are congregating without face masks and/or in close proximity of each other, thus, further endangering their own health and that of the community and the City and County altogether―this in itself is a violation of LA County COVID-19 health orders.

Lack of Parking Enforcement
People who live in Recreational Vehicles (RVs) or out of their vehicles throughout the City have decided to park in our neighborhoods and litter our sidewalks with their bulky belongings besides dumping their sewage into the streets (see Figure 4). Neighbors are uncomfortable using the sidewalks on their way to commerce, for exercise, or for a stroll when in proximity to vehicle dwellings as their nomadic owners verbally harass passersby and/or are in use of narcotics in front of children, women, elderly, and all law-abiding citizens. Even though vehicles have expired vehicle registration tags LAPD cannot cite vehicles nor have them towed at this time during the pandemic and even when the suspension of parking enforcement period duly expires (October 15, 2020) some council members are already postponing the set expiration date to a much later date, thus prolonging the neighborhood degradation. Dilapidated vehicles are therefore given a pass to park in our neighborhoods without fear of vehicular code consequences or concern for homeowners and renters.
Figure 4: Recreational Vehicle and overflow of belongings at 9855 Lemona Avenue, North Hills.

We are dismayed at the state of our City and if there is some physical legacy on your part that can change the aforementioned conditions it would be cleaning up―and keeping―our neighborhoods clean, properly enforcing the street vending situation, repaving damaged roads, fighting judgments that restrict the Los Angeles Police Department from enforcing laws/city ordinances, standing up to California state legislators' proposed bills and existing laws that hurt taxpayers and override local control, and by both protecting and thanking the middle-class of the City of Los Angeles that pays your salary, that of the rest of the elected officials, and that of the workforce that is charged with operating the city. There is still time to just "make it happen" and honor the heroes that protect this great City such as police, fire, Sanitation, among some of the City's workforce, and concerned citizens that take the time to represent their communities. Please be mindful that Angeleno taxpayers run this town.