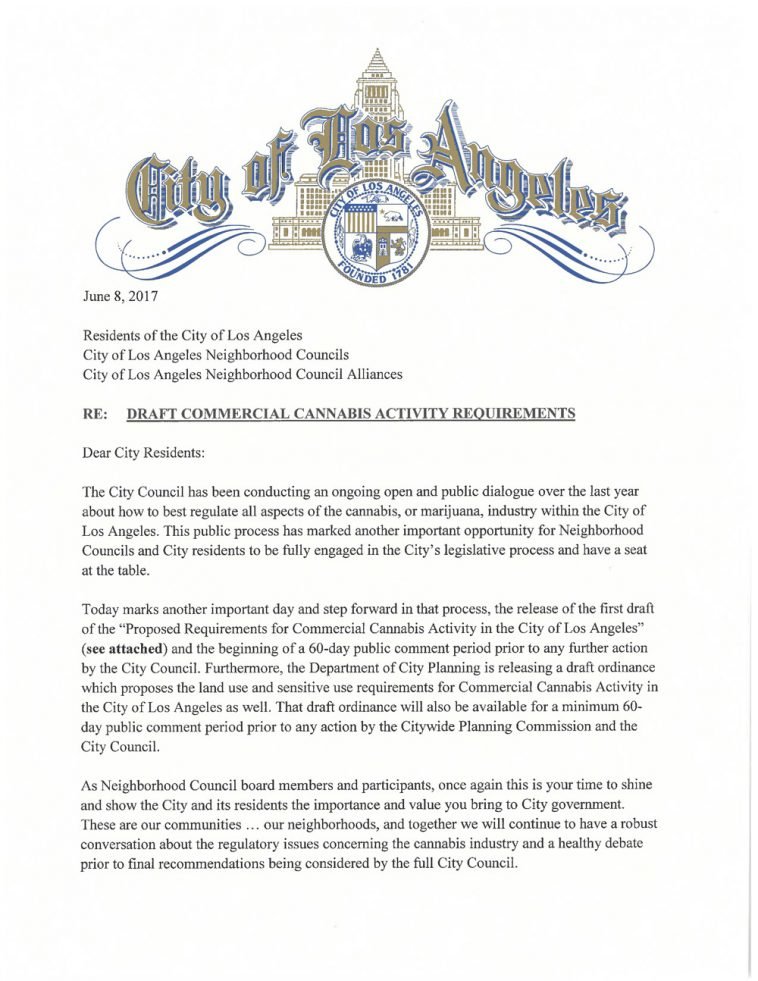 After more than a year of working directly with residents and stakeholders, City Councilmembers encourage an ongoing public dialogue of new rules in the months to come

Los Angeles City Council President Herb J. Wesson, Jr. was joined today by Councilmembers Bob Blumenfield, Paul Koretz and Nury Martinez in releasing the city’s draft regulations governing commercial cannabis activity. The City Council has been engaging in an open and public dialogue over the last year about how to best regulate all aspects of the cannabis industry citywide. Today marks another step forward in the transparent process with the beginning of a 60-day public comment period prior to any further action by the City Council.

After shepherding Measure M to a historic 80.5% passage rate, Wesson immediately began the process of gleaning best practices from neighboring cities and states who had already established responsible cannabis regulations. Wesson who chairs the Rules, Elections, Intergovernmental Relations, and Neighborhoods committee which has overseen the crafting of the draft regulations. Since beginning the process Wesson has held over a dozen meetings, including in the evenings, inviting members of the public, industry experts, and regulators from other states including Colorado, Oregon, and Washington to provide testimony.

“We will continue to have a robust dialogue about the regulatory framework and a healthy debate of Los Angeles’ growing cannabis industry prior to final recommendations being considered by the City Council, said Los Angeles City Council President Herb J. Wesson, Jr. “I’m calling on all residents and stakeholders to provide comments and feedback on the draft documents to ensure the pending regulations are inclusive of all communities.”

The City Council’s adoption of new regulations on the cannabis industry is expected to bring tens of millions of dollars in new revenue to the city’s coffers. To help ensure equity in the emerging local industry, Wesson has pledged his support to championing a social equity program intended to serve individuals and communities that were disproportionally harmed by cannabis prohibition. The proposed program is aimed at reducing the barriers to ownership of commercial cannabis businesses through access to training programs, employee training programs, and technical assistance among other offerings.

"Voters called upon us to prepare our city to enter this brave new world of legal Marijuana and these draft regulations are a solid starting point. Our goal is to make recreational marijuana a net positive for consumers, community, business, public safety and city coffers. As the largest city to regulate marijuana, we will be the blueprint for the rest of the nation," noted Councilmember Bob Blumenfield.

"The release of this draft ordinance is a crucial step in the city's effort to prepare for the January 1 statewide legalization of cannabis and, more specifically, to help us create a clear and enforceable set of regulations here in Los Angeles," said Councilmember Paul Koretz.  "I expect to make comments on the draft myself, and I encourage everyone with any kind of interest in this challenging issue to participate and help us come up with the best regulations possible."

“No one neighborhood should bear the brunt of the cannabis business.  In adopting new cannabis regulations, we can avoid the mistakes of Prop. D, which created an environment where illegal shops could run rampant. These rules to implement voter-approved Measure M will help us make sure that there is no concentration of pot shops in just a handful of communities,” added Councilmember Nury Martinez.

The draft regulations provide guidelines for application processing, inspections, enforcement, applicant and operational requirements, and renewals for operators proposing to do business in the city. The draft regulatory document can be viewed here. Additionally, the Department of City Planning today released a draft ordinance proposing land use and sensitive use requirements governing commercial cannabis activity citywide, which will be available for a minimum 60-day public comment period prior to any action by the Citywide Planning Commission and the City Council. The Department of City Planning’s draft ordinance can be viewed here.