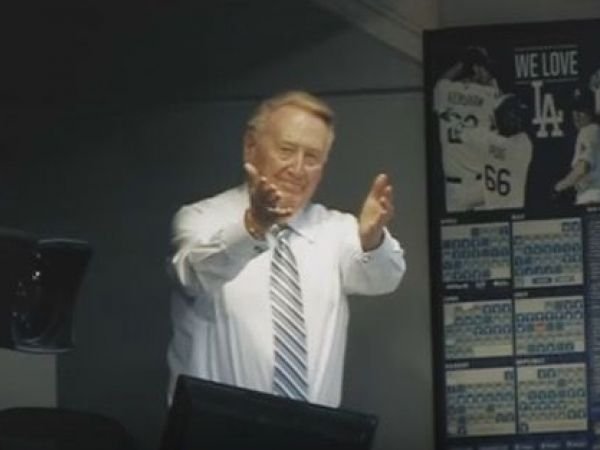 The voice of the Dodgers, the voice of baseball, Vin Scully will call his final game at Dodgers stadium Sunday after 67 years in the booth.

It’s the endless and favorite debate of all sports fans: Who is the greatest of all time?

When it comes to baseball broadcasters, few would debate Vin Scully’s place at the top of the list.

This weekend’s series against the Rockies will mark the last time Vin Scully will call a game from Dodgers stadium. His 67 years with the Dodgers is the longest tenure of a broadcaster in any sport. City Councilman Gil Cedillo declared Friday Vin Scully Day, and Los Angeles Mayor Eric Garcetti will present Scully with the key to the city.

But it’s too late. Scully’s been in LA’s homes and hearts for the better part of a century. He called Hank Aaron’s record-breaking home run and the perfect game Don Larsen pitched in the 1956 World Series. He is the voice of the Dodgers, and for millions, the voice of baseball itself.

Perhaps it’s his love of the game that made him an all-time great and kept him at it for nearly seven decades.

"I try to call a play, shut up, and listen to the crowd, and in that moment, I'm 8 years old,” he said recently.

“I guess my thermometer for my baseball fever is still a goose bump.”

Most LA residents have cherished memories narrated by Scully.

“Growing up in a humble household, it was not often that I had the opportunity to attend a Dodger game with my dad. Players came and went as they were traded and retired, but the one constant at Dodger Stadium was always Vin Scully,” Cedillo said. “He has made a tremendous impact helping unite Angelenos from every part of the City, if even for one night, as they gather to enjoy ‘the old ball game.”

A game called by Scully is one of folksy charm and baseball wisdom.

“Andre Dawson has a bruised knee and is listed as day-to-day. Aren't we all?” he once quipped.

“It's a mere moment in a man's life between an All-Star game and an old-timer's game,” he famously noted.

Friday, Saturday and Sunday's games against the Rockies will air on Dodgers’ SportsNet LA channel and KTLA (channel 5). The game times are 7:10 pm. Friday, 6:10 p.m. Saturday and 1:10 p.m. Sunday.