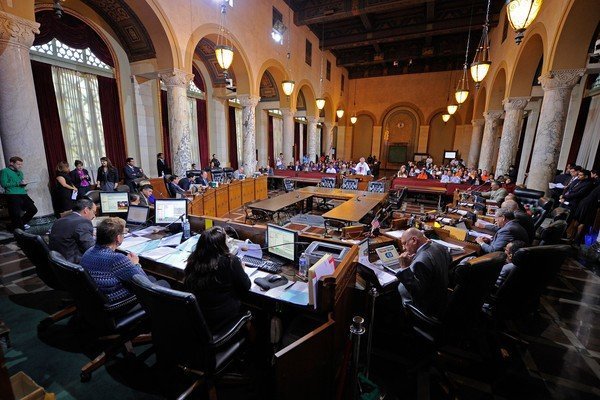 Public meetings will be held before the plan goes onto a future ballot.

Responding to the uproar by Neighborhood Councils and community activists, the City Council Tuesday dropped plans to put a $3 billion road repair bond measure on the May 21 ballot.

Councilmembers Mitch Englander and Joe Buscaino, who sponsored the measure, proposed holding it for a future ballot in order to "give the proposal more time for consideration by all Los Angeles stakeholders and to engage in a massive public outreach effort."

The councilmembers asked the city attorney to draft language for a future ballot measure and referred the bond issue to the Public Works Committee, which Buscaino chairs. The committee will hold public meetings throughout the city.

“Providing for safe, well-maintained streets is one of the most basic core functions of city government, and is crucial to our economy and our daily lives,” Englander said. "We want all stakeholders -- community members, Neighborhood Councils, chambers of commerce, community-based organizations and businesses -- to have the opportunity to weigh-in, and that has always been one of the central goals of the street repair proposal.”

Under the general obligation bond, the owner of a $350,000 home would pay about $119 per year in added property taxes over the course of the 29 years it would take the city to pay off the debt. The tax on a property's assessed value would start low and increase as the city borrows more heavily to fund the street repairs, with the rate eventually declining as the city stops borrowing more money.

The bond issue, called the largest infrastructure proposal in the country, would repair 8,700 miles of failing city streets over a 10-year period.

Bureau of Street Services Director Nazario Sauceda told the council at a hearing last week that his bureau has effectively stopped repairing the city's worst streets, instead using its resources to maintain streets that are in good condition and worth saving. Replacing the current backlog of failed streets would take the city about 60 years under the current level of funding.

"It makes us look like we are a city in decline," Sauceda said.

The councilmen said the bond measure is necessary, in part, because sources of state and federal funding for road repairs are nearly tapped and not expected to be replenished. Replacing and then maintaining failed streets would improve property values and make the city more attractive to businesses and investors, they said.